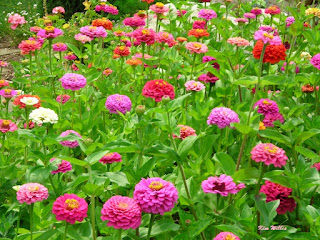 Zinnias are one of the easiest flowers to grow from seed.  The seed can be sown in the garden after all danger of frost or started indoors for earlier flowers.  If grown indoors don’t start the plants too early.  Zinnias suffer a little from transplanting and small plants recover faster.   Start the seeds indoors in a warm area about 3 weeks before your last frost.  Zinnia seed will germinate in less than a week in the right conditions.  Or plant zinnia seed outside after the last frost, when the soil is warm.  Cover the seed lightly with fine soil or compost and keep moist.   Thin seedlings or transplant your indoor seedlings to stand about 6 inches apart for small varieties and 8-10 inches apart for tall types.
Zinnia seedlings are often available in nurseries for sale.  Ones that have started to bloom or have gotten tall and spindly in a small cell pack should be avoided.  Zinnias bloom in 6-10 weeks from seed.
Zinnias require full sun.  They thrive in hot areas as long as they get enough moisture.   They like good rich soil and appreciate a slow release fertilizer in the spring when they are planted and a booster shot of fertilizer in mid to late simmer.    Zinnias need to be watered if there is less than an inch of rain each week, or sooner if they appear to be wilting.  They will reward you with hundreds of colorful flowers for just a little care.
If you are growing some of the older, heirloom varieties of zinnias, a little pinching back in early summer will make them bushier and produce side branches with more flowers.  Many new varieties already have a good branching habit.   You can cut zinnias without a worry for bouquets as this just encourages the plant to bloom more.  Be careful to cut blooms though, not pull at the plant to remove flowers as this may damage the root system.   Deadheading, removing the old flowers before they set seed will keep the blooms coming.
In late summer you may want to let some zinnias go to seed.  The seeds are easy to collect and store for next year.  Wait until they are fully dry on the plant then clean out the old petals and other junk and store at room temperature.  Use clean dry jars for storage or heavy duty plastic bags.  In mild areas zinnias often re-seed in the garden. You may not get exactly the same flowers as the zinnias this year but they will be colorful and who knows, you may discover something unique.
Zinnias worst problem in the garden used to be powdery mildew, which they are very prone to getting in humid areas.  Modern varieties are very resistant to powdery mildew.   Powdery mildew makes a white powder on the leaves, which then dry up and die.  Plants usually keep trying to produce flowers but much of their energy is used replacing foliage and the dead foliage looks awful.
Water zinnias early in the day so the foliage dries before night, and try to water at the base of the plant.  Make sure the plants are not too crowded.  Remove all of the dead foliage after a frost and take it away from the garden. If you want to grow some of the beautiful older varieties of zinnias you will probably need to protect them with a flower fungicide, beginning in early summer.

For low masses of color in borders and beds try the ‘Magellan’ series, which is available as a mix or several individual colors. They have 4-5 inch double flowers on foot high plants.  ‘Dreamland’ series are similar but shorter.  ‘Aztec Sunset’ has 2 inch flowers of mahogany red and bronze on compact plants.   ‘Profusion’ series of zinnia has single, daisy like flowers on compact plants.
“Zowie’ has 3-5 inch flowers on 3-4 foot stems.  They begin magenta pink and yellow, but change to flame red and yellow as they age.  ‘Big Red’ is big- a 3 foot or taller plant smothered in scarlet red 6 inch flowers.   ‘Envy’ has unusual lime green 2 inch flowers on 3 foot plants.   ‘Candy Stripe’ is an older variety with white double flowers, variegated with streaks of pink and red.  ‘Oklahoma’ series has small 1-2 inch flowers, on 2 foot plants, excellent for cut flowers.  ‘Giant Cactus’ is an old variety with large, 4-5 inch flowers that have narrow petals giving the blooms a fluffy look.  ‘State Fair’ is one of the oldest varieties still on the market.  It has large double flowers in assorted colors.
I’m growing zinnias this year- how about you?