What many gardeners call a geranium is actually a pelargonium, a non-hardy plant commonly planted for summer color.  True geraniums are also found in the garden, they are mostly hardy perennial or biannual plants and are commonly known as cranesbill geraniums, wood geraniums, or wild geraniums.  There are cranesbill geraniums that will grow in sun or shade, in woodland gardens, rock gardens or formal garden beds.  These refined and pretty plants deserve a spot in every garden. 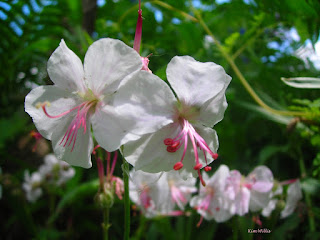 
Other species found in gardens include Geranium phaeum, sometimes called black widow or dusky cranesbill, which is from Europe and has spawned several garden cultivars.  Geranium sanguineum is native to Europe and temperate Asia. Geranium cantabrigiense, Geranium cinereum, and Geranium pretense have also contributed to the scores of geranium varieties.  The geranium species hybridize fairly easily and provide us with many interesting garden subjects.


The cranesbill geraniums have leaves with 5-7 lobes or parts, each of which are also divided and usually have a wavy or toothed margin. There are some varieties with purple or marron foliage.  Plants range from a few inches high to 2 feet, depending on species.


The flowers of cranesbill geraniums may vary a bit depending on species but most have 5 petals and are ½ inch to two inches wide.  They are held above the foliage   Some species have petals that are swept back in a more “shooting star” shape.  Colors range from white through shades of pink, lavender, violet, blue, and even a deep purple, almost black color.  There are spotted and streaked flowers also.


Most native species bloom for a few weeks in spring or summer but some cultivated varieties have a longer bloom time, blooming on and off through summer.  The plants are generally used as fillers, their dainty flowers and sometimes pretty foliage weaving among other plants for a touch of color.  They are particularly useful for a touch of color in semi-shade.  Some cranesbill geraniums make good groundcovers and the ones with a compact form and colorful foliage are great container plants. The newer compact plants are also used as specimen plants and even as border edging.


The cranesbill geraniums get their name from their seedpods, which have a long, pointed extension said to look like the bill of a crane or stork pointing upward. (In some species the “bill” isn’t very long.)  This seedpod is divided into 5 sections, the “beak” is like the handles of 5 tiny spoons fused together and the bowl of each spoon holds one seed.  When the pod is dried enough the seed pod violently contracts and each seed is hurled away from the plant with the spoon catapults.


The cranesbill geraniums spread both by seed and in some species by producing runners.  They are not considered aggressive spreaders in most locations.  When plants have developed into large clumps they may be divided for new plants.


Most species of cranesbill geraniums prefer partial shade and rich organic soil but are tolerant of other conditions.  If kept moist most perform well in full sun.   They will tolerate some drought but may go dormant in hot dry conditions and disappear for a while.  In early spring fertilize with a general purpose, granular fertilizer.


Cranesbill geraniums have few pests and problems in the garden.  If you are growing the plant in a container or as a specimen you may want to deadhead (remove dying flowers) to make the plant look nicer. The plants do not need regular dividing, although you can take divisions of large plants if you want to propagate it.  This is best done in early spring.


Cranesbill geraniums have astringent properties and dried powdered roots were used to stop bleeding. The cooked, mashed roots were used for hemorrhoids.  A tea of leaves was made for toothache and mouth sores by some Native Americans.


Cranesbill geraniums deserve a spot in your garden because they are versatile, pretty and low maintenance.  There are so many varieties one is sure to suit your needs.   Why not give this garden staple a try?