Hummingbirds- attracting them to the garden

Attracting hummingbirds to the garden 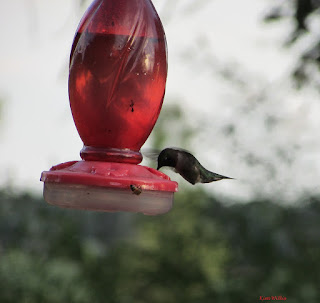 I have been sitting outside the last few days trying to get a good picture of hummingbirds with my new camera.  I managed one that’s fairly good, as you will see.  I really enjoy watching the hummers in the summer and my property is blessed by several pairs of the tiny birds each year.  I have 3 nectar feeders and a variety of plants that attract them.

In the northeastern United States the only hummingbird species we get to see is the Ruby Throated hummingbird, (Archilochus colubris).  In the south and west there are several other species.  All  American species prefer the same sort of flowers and feeders. Fastest Things on Wings- Rescuing Hummingbirds in Hollywood by Terry Masear- is a book that can give you more information on western species of hummingbirds.
The Ruby Throated hummingbird arrives in zone 5-6 in late April-early May from its winter home in Central America.  Males generally arrive first and establish territories. The Ruby Throated hummingbird is tiny, 3-4 inches long.  They are iridescent green with white undersides.  The male has a slash of bright red under the throat and a forked tail.  The female lacks the red throat and her tail isn’t forked.  Females are slightly larger than males.

The name hummingbird comes from the humming sound the birds make as they fly.  It’s also described as a buzzing sound.  Hummingbirds not only hover but they can fly backwards and straight up and down.

Hummingbirds are loners, they don’t form pairs and males and females often fight over food sources like a feeder.  Fighting can be quite vicious and tiny squeaks of rage are often emitted. Hummingbirds can fly into people and objects during these mobile battles.

After mating the female hummer constructs a tiny cup shaped nest on a tree limb composed of lichen, scales from tree buds, and spider silk.  It’s usually lined with animal hair or fluff from seeds like milkweed and dandelions.  Two eggs are laid and the female cares for the young by herself.  Baby hummers are fed nectar and tiny insects.  A female sometimes raises two sets of babies in a summer.

Baby hummers and even adult hummers are eaten by other birds; crows and blue jays raid nests and have been seen swooping up adult birds, usually when they are fighting or otherwise distracted.  Large praying mantises have even been seen at feeders catching hummers.  Lizards and snakes as well as the usual cats and other animal predators take a few, although the birds are quite swift and evasive.

Hummingbirds do eat nectar; they insert their long beak into flowers, the long tongue inside that beak sips up the nectar.  But they also eat a lot of small insects such as aphids, fruit flies, mosquitoes, and spiders.  Hummingbirds need to eat frequently from sunrise to sunset to fuel their high metabolism rates.

While nectar feeders may attract occasional hummers if you want to see them frequently you also need plants for nectar and the kind of habitat hummers love.  Hummers like open wooded areas, edges of woodlands, and environments with large trees but also numerous areas with flowers.

Hummingbirds do not require drinking water but like to bathe in a fine mist or spray of water.  Lichens on trees and other objects are used for nesting and allowing some plants like dandelions and milkweed to go to seed will help them with nest building too.

There are all kinds of hummingbird feeders out there and sometimes a simple one attracts the most hummers.  Look for one that is easy to fill and clean.  The feeder needs only a small amount of red around the feeding ports to attract hummers.  It can have perches or be without them, hummers use both.  Feeders should be suspended at least 5 feet above the ground and feeders should be located in the open where they can see predators approach.

To make nectar boil some water, turn off the heat and then stir in 1 cup of sugar for every 2 cups of water and stir to dissolve.  After its cool it’s ready to use.  It does not need to be dyed red and artificial colors shouldn’t be used.  Always use white sugar, never honey, corn syrup, artificial sweeteners, stevia, agave or other sweeteners.  These things can harm hummers.

Hummingbirds seem to prefer homemade nectar rather than the red stuff you buy in the store and making your own is cheaper. Those store bought mixtures often contain preservatives as well as dyes and may have a taste hummers don’t like.  You can make up a large batch of hummingbird nectar and refrigerate it for several weeks or even freeze it, to save time.

Dump and clean feeders several times a week.  It’s better to have small feeders for this reason, you don’t waste nectar.  Ants and bees will find their way into feeders.  Use bee guards if you want to discourage bees.  These are cage like things that fit over nectar ports. But bees are good for the garden too and unless you are allergic you may want to let them eat.

You can put something like petroleum jelly at the base of poles holding feeders to stop ants, but never get anything sticky or greasy up close to the feeders where humming birds could touch it.  It could keep them from flying well if it gets on their feathers.  And of course never spray pesticides around feeders.

Put up several feeders around the garden in places where you can observe the hummers if possible. Put them at least 10 feet apart.  Since one hummer may chase others away from a particular feeder having several allows more hummers to visit your garden.