Cleome hassleriana, the common garden cleome, is native to southern South America.  It’s been grown in gardens for centuries and while it’s an annual plant, once you have it in your garden it generally re-seeds itself and returns year after year.  In my garden it comes up in pots of bulbs I store over winter because seed has fallen into them the previous summer.  I have even had the plants come up in houseplants that summered outside.  By late spring some of the plants were blooming inside. 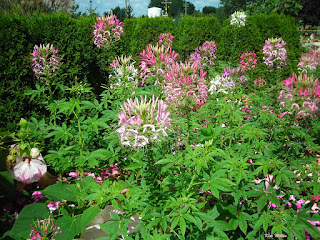 Cleome is often called spider flower or spider plant.  This tall and graceful flower looks good in masses at the back of flower beds.  It lends an airy elegance to large pots also.  There are now dwarf varieties for pots and front of the border uses.  The foliage is attractive and a conversation starter because it’s often mistaken for marijuana.

Cleome leaves consist of 5-7 leaflets arranged palmately (like the fingers on your hand).  The leaves are sticky and there is a thorn at the base of each leaf stalk.  The foliage however interesting looking, has a pungent smell reminiscent of cat urine.  It’s only notable if you brush or crush the foliage and you won’t smell it if you are just admiring the tall, beautiful flowers. Stalks are sturdy and may reach 5 feet high.

Cleome flowers are arranged in circular clusters at the top of the plants and sometimes on side branches. The flowers have 4 oval petals attached to a center disk by a stem, giving them a fluttery, airy look.   Each flower has a long slender stamens sticking out like cat whiskers which accounts for the spider name for some reason. Personally I never saw the resemblance to a spider. Cleome comes in white, lavender, purple and pink shades.  Plants will grow taller and continue to bloom from mid- summer to frost.

Cleome flowers are attractive to bees and hummingbirds.  Some say the flowers have a sweet scent; others describe it as musky, although I think if it’s there it’s very subtle. The flowers turn into long, narrow pods filled with tiny black seeds. When the pod is ripe the seeds are scattered widely.  If you don’t want cleome all over the garden you’ll want to keep the flowers cut off as they fade.  Birds are said to eat the seeds, although I don’t think they would be a preferred food.

There are numerous varieties of cleome on the marketplace.  You can now get seed of one color, which years ago wasn’t possible.  The ‘Queen’ series has several separate color forms.  ‘Senorita Rosalita’ is a variety said to have scentless foliage and no thorns. It goes not produce seeds.  The ‘Sparkler’ series are cleomes that are compact and only 2-3 feet tall.

Cleome prefers full sun but will survive and even bloom a little in partial shade.  It’s not fussy about soil and will grow in just about any soil as long as it’s well drained. Light fertilization will produce more blooms but isn’t necessary.  Cleome does appreciate regular watering, but can survive short dry periods.

Sow cleome seeds where they are to grow after the soil has warmed – about 2 weeks before your last predicted frost. Or start plants inside 4-6 weeks before the last frost.   You can fall sow the seeds also, that’s what nature does.  Simply sprinkle the seeds where you want them to grow and let winter rain and snow plant them for you. Most garden centers also carry started plants.  Cleome shoots up quickly and in good soil can get 5 feet high.  The plants begin blooming about 6 weeks after they sprout and will bloom continuously until frost.

Cleome plants are prolific seeders and from one planting of cleome you may have plants for many years, without having to plant them again!  Plants that come up from seed shed the previous year may not have the same flower color as the parent plants but diversity is good.  If you don’t want them to re-seed themselves you can cut the narrow seed pods off as they form.  Don’t cut the bloom stalk as the plant keeps getting taller and putting out more flowers at the top.

Deer and rabbits generally leave cleome alone.  The plant rarely has problems with insects. Aphids occasionally attack plants, usually stressed ones.  Plants will occasionally get powdery mildew, but it’s not as noticeable or disfiguring as in other types of plants.  Rust fungus is sometimes observed on cleome. In some warmer climates the plant could become invasive and even some northern gardeners complain about the prolific reseeding the plant does. 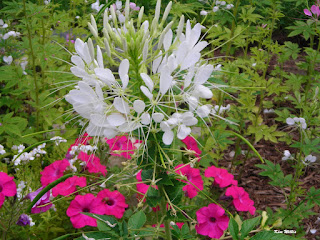 Other uses of cleome

Cleome hassleriana is considered to be non-toxic to people and animals.  It is not considered to be an edible plant or despite its resemblance to one, a smoking plant.  It has no known herbal uses, when you see a reference to cleome in certain herbals it refers to other species of the plant, some native to North America and some to Africa.

Despite having no edible or herbal uses cleome is an excellent garden subject with uses in formal and informal gardens.  Some plants are meant to be admired for their beauty and usefulness to other species like bees and butterflies, rather than as food and medicine for humans. Consider some cleome for your garden and enjoy its graceful beauty.