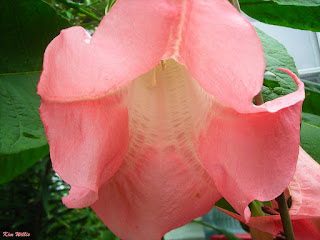 You will see the beautiful Angel’s Trumpets advertised in many garden catalogs. The plants have pretty trumpet or funnel shaped flowers that are often have a light, sweet fragrance.  In the north these plants are excellent tub plants for decks and patios.  It can be tricky to overwinter them but you will be rewarded with larger and more beautiful plants each year.  A flower loaded Brugmansia is a traffic stopper.

Brugmansia are plants belonging to the Solanaceae (nightshade) family, the same family that tomatoes and potatoes come from.  Modern botanists generally regard Brugmansia as having 9 species. Brugmansia originate in South and Central America, although they can come from many different climates in those countries.  There are literally hundreds of named varieties of Brugmansia with many hybrids between the species.

Brugmansia species are semi-woody perennials, forming bush or small tree shapes.  In the wild some species are 30 or more feet high.  They have long oval leaves, sometimes toothed, that can get quite large. Brugmansia foliage tends to be a dark green and there are Brugmansias with variegated foliage.

The trumpet shaped flowers of Brugmansia typically dangle downward although some face out horizontally. They can be a foot long, sometimes longer.  Brugmansia flowers come in a wide range of colors from white to peach, rose, pink, lavender orange and recently red. They often change color as they age. There are many double flowered Brugmansia varieties.

Brugmansia flowers are not self – fertile and they do not come true from seed.  When breeders find a Brugmansia plant they like they propagate it by cuttings.   Brugmansia seed pods look like a bean pod with a corky covering in some species.  Brugmansia seed rarely survives a cold winter, so it seldom spreads on its own. 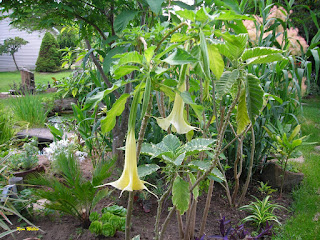 Brugmansia are usually purchased as rooted cuttings.  Most catalogs show large plants loaded with beautiful flowers but be aware that it can take two years for that little potted plant to get to blooming size and many years before it makes a large plant.  Some plants started indoors early will flower the first year.

Brugmansia are generally kept as tub plants and overwintered inside.  Temperatures must be kept above 40 degrees F.  In zone 8 and above they can be planted directly in the garden.  (Some zone 7 gardeners have had success overwintering Brugmansia outside.  The plants die to the ground and then are heavily mulched.)

For tub plants use a non-soil potting medium and do not plant the cutting in too large of a pot, let it nearly fill the pot with roots, then transplant to a larger pot.  Indoors the plants should be in as bright of light as possible, preferably a greenhouse or sun room.  Watering should be reduced if the leaves drop, as many plants shed leaves indoors.  If the light level is too low or the room cool some plants will go semi-dormant.  Some people actually prefer to let plants go semi-dormant for the winter.

Plants are moved outside after all danger of frost has passed and the nights are reliably warm.  Brugmansia prefers a dappled or partly shaded area when outdoors.  They will quickly respond to bright warm conditions and grow larger each year.

Brugmansia likes moist, well drained potting medium and should be fertilized with a dilute flower fertilizer every other watering or have a slow release flowering plant fertilizer worked into the planting medium.  Evenly watered, well fertilized plants in warm conditions and good light usually bloom almost continually once they start blooming. 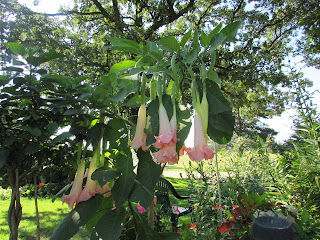 All parts of the Brugmansia are extremely poisonous.  Brugmansia contains 3 poisons, atropine, scopolamine and hyoscyamine.  Indigenous peoples used the plants various parts in religious and divination ceremonies.   The plant parts often cause hallucinogenic symptoms or loss of conscious control of the body.  They can also cause respiratory failure or heart problems.

Any person or animal that has ingested any amount of Brugmansia should be immediately taken to a hospital.   A drug called physostigmine can counter the effects of Brugmansia poisoning if given promptly.  Cardiac and respiratory support may be needed and the stomach will be pumped.  The patient may need restraints to prevent harm to him/her self.

Despite being poisonous, brugmansia are wonderful tropical plants that deserve a place on the porch or patio of the adult plant lover.