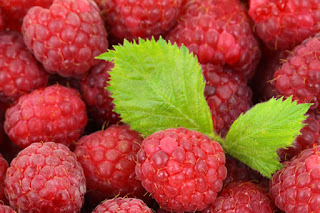 
Some raspberry varieties for Michigan


Raspberries should be planted in the early spring.  Buy certified, disease free raspberry plants from a good nursery.  Generally raspberries are sold as dormant roots, with a little stub of stem as a handle.  You can store these dormant roots in a cool place - [32- 50 degrees], for a few days until you are ready to plant them. Sometimes you will find potted raspberry plants in nurseries.  Even if you love raspberries, a small family will only need from 6-12 plants.   Raspberries spread, and a small row will soon be larger.  Plant raspberries about 2 foot apart in rows that are about 8 foot apart.


One of the best things you can do to ensure success with raspberries is to prepare your planting area in advance.   Clear the area so there is no grass or weeds left in the row.  To make raspberries easy to care for, they should be attached to a trellis system of some sort.  You can put sturdy posts at the end of each row and string heavy-duty wires or cables between the posts, or you can use fencing between the posts as support.   Mulch between the plants and mulch the paths or plan to mow the paths often.  Once weeds and grass take over a raspberry patch it is a huge undertaking to get things cleaned up again and the plants grow better without the competition from weeds.


About two weeks after planting, or when you notice the plants are starting to grow, they should be fertilized with 12-12-12 or similar fertilizer.  Use about ½ pound per 25 feet of row or follow label directions.  Don’t let fertilizer directly touch the plants and water after fertilizing.  About 6 weeks later repeat the fertilization.   Every year after that your raspberries should be fertilized in early spring, just as growth starts, with about 1 pound of 12-12-12 per 25 feet of row.  Do not use Epsom salt on raspberries.


Raspberry plants do need lots of water, especially in hot weather and on sandy soils.  If dry conditions develop, watering your plants deeply once a week will keep them developing fruit.  Fruit that isn’t watered during dry spells may be small and crumbly.


Raspberries are prone to virus infections, especially if wild raspberries are nearby.  Always buy your raspberry plants from a reputable nursery who guarantees them to be virus free.  Symptoms of a viral infection can be yellowing, wilting leaves, curling leaves, mottled leaves, blistered leaves, leaves with orange powder on the back, stunted looking canes and shriveled canes with black areas along them.  Your county Extension office will be able to help you confirm a viral infection.  Viral infections cannot be cured. The plants need to be dug and destroyed.  Don’t plant raspberries in the same spot for several years.


Pests of raspberries include birds and Japanese beetles.  You can keep birds away with netting over the plants as soon as the berries begin to ripen.  Japanese beetles are harder to control.  They attack fruit as it ripens, making pesticide application tricky.  You can hand pick them or wash them off with a hose sprayer full of insecticidal soap.  Do not spray them with dish washing soap or other concoctions.


Pruning and thinning correctly is the key to keeping your raspberry plants strong and productive.  The roots of raspberries are perennial, but the canes, or stems, each last only two years.  Each type of raspberry requires slightly different types of pruning.  If you have purchased a mixture of raspberry types it is best to keep the types together and labeled so you know how to prune.


Summer bearing raspberries should not be pruned at all the first year, just tie them to the supports you have put in. They won’t have a crop the first year.  In the second year, after they have had a crop and it has been harvested, cut off all the canes that bore fruit right to the ground.  Leave all the new young canes that have developed. New canes have green stems; old ones have brown, woody looking stems.


In the third spring thin the canes of summer bearing raspberries you left to about 6 canes per foot of row.  Trim the ones you leave back to chest height- about 4 foot- and if they had winterkill, trim off any dead areas.  Do your pruning in early spring, just before growth starts, and make your cuts just above a leaf node, (joint). Repeat every year. Black and purple raspberries may have long side branches the second and following years that should be shortened to about 10 inches.


Ever-bearing raspberries may have a small crop the first fall.  Do not cut off any canes, they will fruit again early next summer on the same canes.  After those canes have produced fruit, cut them out.  Don’t prune any canes the third year, and thereafter, until they have produced fruit again, but you can thin them out in the spring if the rows are crowded and cut off winter killed areas.  After the second year you may also want to trim the canes back to about 4-foot high each year in the spring.


Fall bearing raspberries are fairly simple to prune. Fall bearing varieties are actually ever-bearers that are pruned differently.  In the first year you will get a small crop in the fall.  In early spring of the second year cut all canes right to the ground.  You’ll get a fall crop.  Repeat every year- cut all canes off in early spring.  You will have to thin plants in the rows in spring also.


Keep raspberries harvested as they ripen to keep them producing longer.  Raspberries slip off the stem leaving a white cone shaped structure behind.  This is normal and you don’t need to cut those off.


Don’t wash raspberries until just before you are ready to use them.  Raspberries don’t keep well for more than a day or two.  Store them in the refrigerator and use promptly.  If you have excess berries you can freeze them.  Spread them out on a cookie sheet and place in the freezer until firm.  You can then put them in freezer bags for long term storage.  You can also freeze raspberries in a sugar syrup. Another way to preserve raspberries is to make jam or preserves from them.