Forsythia is one of those rare plants that are most often referred to by the Latin name, (forsythia,).  The golden flowers of forsythia signify that spring is here.  This cheerful shrub is native to Europe and Eastern Asia but hardy and easy to grow. Forsythia is used in foundation plantings, as specimen plants, in perennial borders and as hedges.  The smaller varieties blend well in larger perennial beds.  Forsythia blooms are edible and are sometimes used in spring salads.

As spring arrives a line of gold moves from south to north.  The yellow, four petal forsythia flowers open before the plant leafs out in the spring.  Forsythia has narrow, dark green leaves with a lighter underside, and a serrated edge.  There are also variegated and golden leaved varieties. 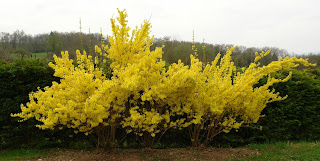 Here are some varieties of forsythia that gardeners may want to try.  ‘Lynwood Gold’ and ‘Spectabilis’ are two of the oldest varieties of forsythia.  Both are large shrubs, up to 6 foot tall, with arching stems of golden flowers.  ‘Karl Sax’ has large, deep golden flowers with a bushier, more horizontal growth habit.   ‘Northern Sun’ is a variety developed in Canada whose buds are hardy to zone 4 or less.

For smaller, more compact forsythias try ‘Golden Peep’, which grows to about 3’ and has a rounded growth habit, or ‘Goldilocks’ only about 30 inches high with blooms that cover the stems totally.  ‘Gold Tide’ has light lemon yellow flowers and is a groundcover about 2 feet high.   Another dwarf variety is ‘Citrus Swizzle’, which is not only small, 1 foot high by 3 feet wide, but has leaves edged in yellow as well as golden flowers.  ‘Golden Times’ is a true gem.  It has golden yellow flowers on a moderately sized plant, but it also has leaves that open in shades of red and pink which mature to purple and in fall change to a glowing purple-pink.

Forsythia is purchased as a plant.  It transplants best in the spring but can also be planted in the fall.  Forsythia will grow in any garden soil from zone 4-8 as long as it is well drained.  In zone 4 forsythia buds are sometimes killed by winter cold, but the plant will not be harmed.  For the best flowers, forsythia should be planted in full sun, but it will tolerate part shade. Deer love forsythia, and if the branch ends are nibbled in the winter you will not have flowers.  You may want to protect your plants with netting or fencing.

Forsythia seldom needs to be fertilized and only needs to be watered during periods of extreme drought. In most areas forsythia is a robust grower and spreads rapidly. Forsythia looks best when allowed to develop its natural, gently arching shape, but can be pruned into a hedge.

If pruning is needed, prune forsythia immediately after flowering.  Thin out some of the older growth and trim the plant back to the size you prefer.   If the plant is overgrown and you need to drastically reduce the size, you can prune it at any time quite severely and the plant will recover. However, you will lose much of the flowers for the next year. Keeping forsythia sheared as a hedge will also remove some of next year’s flowers.  Most varieties set flower buds far down the stems so some flowers may remain even when the plant is sheared.

Forsythia roots easily from cuttings taken in early spring just after flowering.   Branches brought into the house as floral arrangements sometimes even root in the water.  Forsythia can also be propagated by burying a lower branch in soil and weighing it down, leaving the tip of the branch exposed.   After a few months the plant should have developed roots along the buried portion, and can be severed from the parent plant and transplanted.

Some gardeners consider forsythia old fashioned and too large to grow in small gardens.  Don’t be a garden snob, there are many smaller varieties of forsythia for smaller gardens and spring isn’t here until they bloom.