Pumpkins on a stick

Pumpkins on a stick-  Solanum aethiopicum, and Solanum integrifolium
If you like to grow something different, like fall decorating or like to experiment with medicinal herbs then this odd little plant called pumpkins on a stick or Chinese scarlet eggplant may be just the thing for you.  I love the tiny pumpkin shaped fruit because they make long lasting fall arrangements.  And pumpkins on a stick are as easy to grow as tomatoes or eggplants- because they are an eggplant, not a pumpkin.
I was shopping at a farmers market many years ago and a vendor had these tiny little dried, pumpkin-like fruits.  She said they were some kind of pepper.  It looked like orange color may have been added to those fruits and they had a rather papery type skin.  I added some to the fall decorations on my desk and then tried to grow some of the seeds inside the next spring, with no success.
In my search to find those intriguing little fruits again I came upon a seed packet labeled “Pumpkins on a Stick” and thought I had found my plant.  I didn’t, pumpkin on a stick actually has prettier, shiny orange fruits that are larger than the fruits I found at the farmers market.  I think I like the pumpkins on a stick better, they are pretty on the plant and off.  And at only about 2 inches wide they still are smaller than the smallest true pumpkins.  (However I continue to look for those original little pumpkin like fruits I saw that time at the farmers market.)
As mentioned above pumpkins on a stick are actually an eggplant. They are native to Africa but have become naturalized in China and other Asian countries where they were introduced thousands of years ago. I had to do some deep researching on the correct species of eggplant.  It seems that there are actually two eggplant species in the horticulture trade that are given this common name or the name Scarlet Chinese eggplant, they are Solanum aethiopicum, and Solanum integrifolium. They are very similar, and many authors tend to say either name is correct and refer to the same plant.  However, a DNA analysis proves there are two distinct species called by the common name.  Here’s a link to that research: https://link.springer.com/article/10.1007/BF00022555
I noticed that many descriptions of pumpkin on a stick included leaves with prickles and purple stems.  My plants had neither of those things, but the fruits looked identical to pictures of those plants.  It seems I have Solanum integrifolium, it is Solanum aethiopicum which has prickles on the leaves and stems and purplish stems.  When you order seeds of pumpkins on a stick or Scarlet Chinese eggplant you may get either species, depending on what that company is cultivating.
Both species have leaves typical of eggplant, broad triangles with wavy edges.  Solanum aethiopicum has prickles sticking up through the surface of the leaf and on stems.  The plant has a sprawling habit, more like a tomato than a domestic eggplant.  Solanum aethiopicum stems have a purple color.
The flowers of both species of pumpkins on a stick are white.  They turn into clusters of green, ribbed 2 inch fruits that mature to orange and look very much like a ribbed pumpkin in miniature.  The seeds inside are much like pepper seeds, flat and white.
You can harvest the fruits by picking the fruits off individually or cutting stems off.  To dry the fruits, hang stems of fruit upside down in a dark warm place.  The orange fruits store well, lasting weeks as a fresh decoration similar to real pumpkins.  For anyone who grows things for fall farm markets the pumpkins on a stick could be an excellent crop.
Growing pumpkins on a stick
Gardeners will probably have to start with seeds.  I bought mine off a seed rack in a grocery store this year, but several seed companies carry them.  Start the seeds inside about 8 weeks before your average last frost date.  The seeds germinate best in warm temperatures of 70-80 degrees and plants like warm growing conditions also.  Don’t transplant outside until the weather is warm and settled.
Pumpkins on a stick need the same care as tomato or eggplant plants and you will probably need to stake or cage the plants to keep them off the ground.  Plant pumpkins on a stick in full sun.  Water during dry spells.  It takes about 75 days from transplanting outside to get ripe fruit.  Frost kills the plants, if your fruits haven’t ripened before the first frost is predicted you may want to cover the plants to give them more time. 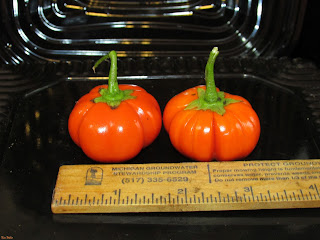 Pumpkins on a stick are disease resistant; their genes are being introduced into the species of eggplant cultivated for food to make them resistant to fusarium wilt and other things.  Insects like flea beetles may chew foliage but rarely do significant damage.  Like most plants in the solanaceae family (peppers, tomatoes, eggplant) pumpkins on a stick are rarely eaten by deer and rabbits.
Other uses of pumpkins on a stick
In Asia the fruit of pumpkins on a stick and also the leaves are used in cooking.  The fruits are harvested in a green or yellow stage and used in various cooked dishes.  If left to turn orange they become very bitter and even green fruit is pretty bitter, try a bite if you grow them.
Leaves are also used as a vegetable when very young, boiled in a change of water like poke leaves.  All parts of the plant would be poisonous if eaten in large quantity and personally I think I would pass on the leaves.
Green fruits and sometimes leaves are used in indigenous herbal remedies to lessen pain and inflammation, for stomach complaints and for swollen lymph nodes.   Modern medicine has found anti-inflammatory and other benefits in the plants.  For more recent medical research results try this link;
https://www.hindawi.com/journals/bmri/2014/953873/
Pumpkins on a stick are a plant every gardener should try at least once, just for the fun of it.  They are great for those who love fall themed decorations and are attractive in the garden as well.   Some of you may want to add pumpkins on a stick to your medicinal gardens also.