If you like native plants (I do like native plants and grow a lot of them, despite defending some non-native ones), and have a shady or partially shaded area you may want to try growing mayapples (Podophyllum peltatum) in your garden.  Mayapples are also known as maypop, American mandrake and ground lemon.  Mayapple is native to the northeastern US and Canada.  The mayapple produces a small golf ball sized fruit which when fully ripe is edible.
Each mayapple plant begins as a leaf stalk rising from an underground stem called a rhizome. There may be several stems from each rhizome and the rhizomes expand and form colonies of mayapples over time.  Each stalk will produce one or more palmate leaves at the top. The leaves consist of 5 leaflets joined at a center point which droop slightly and produce an umbrella effect. Like an umbrella they are folded up as they begin emerging in mid spring and unfurl gradually. The leaves can be 8 inches across and the plant can be 18 inches tall.
A leaf stalk generally needs to fork and produce at least 2 leaves before that stalk flowers.  The single flower, white or rarely pink or yellow, develops at the fork in the leaf stalk.  Each flower has 6-9 shiny petals with many yellow stamens in the center.  The flower is about 2 inches across and droops downward.  To see the flowers, you’ll generally have to peek under the leaves.  In most of the US the plant blooms in May, which is how it gets one of its common names.  The plants are pollinated by bumble bees and other native bees.
If pollinated the flower turns into a small oval fruit which becomes yellow when fully ripe.  Ripening happens in mid to late summer. Each fruit has several seeds.  Box turtles and some mammals eat the fruits and distribute the seeds.  Technically humans can eat very ripe fruit, without the seeds, but care must be taken to not eat too many, as mild poisoning will occur.  The fruit is said to taste like over ripened melon.  Never eat the seeds, which are poisonous to humans.
Culture of mayapple in gardens
Gardeners can start mayapples from rhizome pieces or seeds.  Seeds must be planted directly after removing them from a ripe fruit to get good germination.  Rhizomes are generally easy to get started in good conditions. Zone hardiness would probably be zones 4-8.
Mayapples are woodland plants and prefer to be planted under deciduous trees in moist, highly organic soils.  They need shade or partially shaded conditions as the weather warms up. They will quickly spread in good conditions and some people with those conditions consider them aggressive multipliers.  They make an interesting taller groundcover but will die back in late summer or in extreme heat. 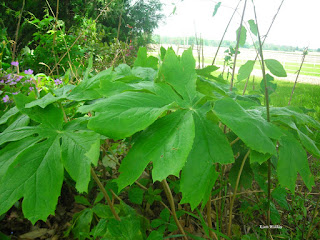 If mulched with leaves or compost the mayapples won’t need fertilizer and in most areas won’t need watering.  Pests are few, thrips and leaf miners are occasional problems but plants survive them well.  Mayapple can suffer leaf damage from late frosts in some areas, but plants generally recover.
I like to see mayapple combined with bleeding heart, wild geraniums, bloodroot, trilliums, lily of the valley and non-natives like hosta.  Remember it will go dormant later in summer.
Caution
All parts of mayapple are poisonous, even fully ripe fruit must be eaten in moderation.  Of course, as with many poisonous plants there are herbal remedies ascribed to the plant.  Native Americans used it for skin problems such as warts and there has been some scientific interest in it for skin cancer cures.   In herbal medicine it is used as a purgative – you’ll be ridding yourself of anything you’ve eaten from both ends.  Mayapple was part of the remedy ‘Carters Little Liver pills’, actually a laxative, and it is sometimes used as a liver remedy also.  Dried roots are generally used in herbal medicine.
Two medicines have been made from refined and isolated chemicals from the plant, one for testicular cancer and one for small cell lung cancer and leukemia.  You cannot make these remedies at home.
Toxic reactions include drastic vomiting and diarrhea and severe inflammation of the intestines, which can lead to death.  It should never be consumed when pregnant or nursing.  Only experienced herbalists should experiment with the plant.  Mayapple was said to be used in some native cultures to commit suicide, but that must have been a terrible way to die.
Some people make jelly or jam from the ripe fruits but I suggest leaving the fruit for wildlife.  There’s a thin line between safe and unsafe consumption of mayapple and much nicer and safer plants to make jelly from.  All plants do not have to be eaten.  Just enjoy them for their beauty.