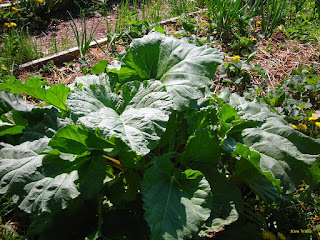 I was out walking in early March and noticed that my rhubarb was already sprouting in the garden.  Rhubarb is a crop that gardeners from zone 3 – 7 can easily grow, so if you like rhubarb and strawberry pie, find room for a plant or two in your yard.  Rhubarb needs a long cold dormant period, so gardeners in the south won’t have great luck with this plant.
Rhubarb is not just for pie, the plants are ornamental, if you like large, impressive leaves and it has pretty, tall spikes of fragrant, tiny white flowers in early summer.  Plants can be tucked in the back of a perennial bed and will fit right in. It will even do well in light shade, although your crop will be bigger and plants more robust in full sun.
Rhubarb is a perennial crop; once you plant it you can harvest it for many years.  Make sure you choose a location for it in your garden where it won’t be disturbed.  As plants mature they can easily fill a 5-6 foot square area, so keep that in mind when looking for a planting location.  Rhubarb isn’t fussy about soil type or soil pH as well as it is in a well-drained area.  It does appreciate a soil with lots of organic matter.
Rhubarb has large, “crinkled” or “rumpled” dark green leaves with bright red stalks. The stalks are redder in the early spring and some varieties have redder stalks than others.  Rhubarb plants slowly get larger over the years and a clump of rhubarb can be 3 feet high and 5-6 feet wide. In early summer rhubarb puts up tall flower stalks with clusters of white, airy flowers.  These will turn to flat brown seed pods if flower heads are not trimmed off.

Gardeners usually start with rhubarb “roots”, dormant divisions of a rhubarb plant.  It can be grown from seeds fairly easily but you must wait several years for a harvest from seed grown plants. There are several good varieties of rhubarb.  Victoria is an old variety that grows well in the garden.  Canada Red and Valentine are two other good varieties.  Rhubarb is generally planted in early spring.   One or two well grown plants are usually enough for a small family.
Rhubarb likes rich, fertile soil.  Work in compost and well-aged manure where you are going to plant it.   Plant rhubarb so the sprouts are about 2 inches below the soil.  Plants should be spaced at least 3 feet apart.   About 3 weeks after planting, as growth starts, use a slow release garden fertilizer around the plants.  If spring is dry, water rhubarb to keep it succulent and growing.

Fertilize rhubarb each year as you see growth begin. Keep it weeded, especially the first year as it establishes itself.  Deer or rabbits rarely touch rhubarb.  Rhubarb has few pests other than kids; make sure you keep an eye on those so they don’t over harvest
Rhubarb may need to be divided if clumps seem to be producing fewer stalks or thin weak stalks.  Simply dig up the whole clump in early spring and pull apart the roots and stem buds into separate clumps with several stem buds on each.  Replant as soon as possible.  Most rhubarb benefits from dividing every 3-5 years.  However many people have had clumps for 20 years without dividing the plants if there is plenty of room for the plants to spread.
Some garden books recommend trimming off the flower stalks before they get very large.  This does concentrate plant energy to leaf and root growth and for the first year or two after you plant rhubarb this is probably a good idea.  After that you can allow the flowers to develop without any harm.  The flowers develop after the spring rhubarb stalk harvest and the plant has time to replace removed stalks before fall.  Do remove the flower stalks after the flowers die, you don’t need the plant using energy to produce seeds and the seed pods aren’t that attractive.
In the fall, after rhubarb leaves are killed by frost, trim them off.  I personally pile the cut leaves over the growing location.  Or after the ground freezes throw a layer of straw or oak leaves over the rhubarb crown.   Remove the mulch in early spring.  It’s a good idea to mark the location of rhubarb clumps with a stake if early garden work could damage them.
Harvesting rhubarb

Unfortunately you’ll need to skip a harvest the first year you plant rhubarb.   The plant needs to establish a good root system and needs all its leaves.  In the second year and every year after, you can harvest up to a third of the leaf stalks.  To harvest rhubarb simply snap or cut the stalks off the plant.   Wash well before eating. Never eat rhubarb leaves.  Stop harvesting rhubarb as the days get hot and if you see flower stalks forming, as it tends to get bitter then.
Rhubarb can be eaten raw as most country kids know, or sweetened and cooked into pies, preserves or jelly.  A common name for rhubarb is pie plant. It is often combined with strawberries for some delectable treats.  Rhubarb can be washed, cut into small pieces and frozen.  Frozen rhubarb will be soft when thawed but can be turned into pies and other treats.   It can also be cooked and frozen.

Caution- and medicinal use

Never consume any part of the rhubarb plant except the stalks and stalks only in the spring.   Rhubarb contains oxalic acid, which can be poisonous.  In the spring, before the flower stalks start, the stems of rhubarb have little oxalic acid and are safe to eat, unless you consume huge quantities.  If there has been a heavy frost or freeze after stalks are well developed the stalks may be high in oxalic acid and not safe to eat.  Wait 7-10 days after weather has warmed before resuming harvest.
Rhubarb has been used in Chinese medicine for thousands of years.  And you may have guessed its primary use- as a laxative. Powdered root was used for this purpose.  Consuming large amounts of rhubarb stalks can also lead to a tummy ache and lots of bathroom trips even in the spring.  It was also prescribed as a diet aid- but I can think of better ways to lose weight.   Modern medicine has isolated a pigment in rhubarb that is being studied for leukemia treatment. Rhubarb root can produce a brown dye.
Michigan is home to a thriving commercial rhubarb crop, most of it grown under glass or in tunnels to provide early rhubarb for those who craving the sweet -sour treat before it is ready in the garden.  Rhubarb is a good crop for early sales at Farmer’s markets.
If you love rhubarb, you can tuck a clump into all but the tiniest garden and enjoy it for many years.  The best tasting rhubarb is right from your own garden.