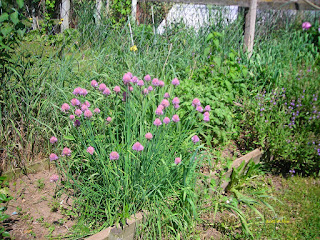 Chives (Allium schoenoprasum) are one of the easiest herbs or vegetables to grow outside and they are also one of the herbs that will do well growing on a windowsill indoors.  Both the green round leaves and the flowers of chives are edible and the plants can be woven into the flower beds where the flowers will provide attractive spring blooms. Not only are the flowers pretty but they also attract bees and butterflies with their nectar.

Chives are perennial members of the onion family and native to China, Eastern Europe and North America.  They have naturalized in many other temperate areas of the world.  Garlic chives (Allium tuberosum) are related but have distinct differences.

Chives have round, hollow leaves that when broken have that distinctive oniony smell.  When they begin growing in spring they can be mistaken for clumps of grass.  You just need to examine and smell a leaf to make the right identification.   Garlic chives smell similar, but their leaves are flat and not hollow.

Chives grows best in the cooler times of the year such as spring and fall but remains green and growing throughout summer, and in milder areas may stay green all winter.  It can be continually harvested during growing season as long as no more than half the plant is removed at a time.

The flowers of chives are a rosy purple. The 6 petaled tubes flare to a star shape, and grow in clusters of 10-30 flowers in a rounded ball.  The flowers are at the end of “scapes”, stiff stems that hold them above the foliage.  The flowers have a nectar that is quite attractive to bees and some butterflies. Chives flowers in late spring to early summer.  The flowers turn into 3 sectioned seed pods filled with tiny black seeds.  Chive flowers can be dried for dried flower arrangements.

Chives prefers full sun outside but will survive in partial shade.  It will grow in any well drained soil.  Gardeners will generally start with plants although chives are fairly easy to grow from seeds.  Be aware that chives often spread rapidly both by increasing the clump diameter and by seed. Once a gardener has chives in the garden they rarely are without them.

To start chives from seed simply sprinkle the seeds on moist planting medium and press them lightly into the soil.  The tiny seedlings look like a blade of grass.  Let them get several leaves before transplanting into the garden or into a windowsill pot.

Outside chives are moderately drought tolerant and will only need to be watered when it’s really dry.  Watering in the summer heat will keep them tender and tasty though.  If you frequently clip the leaves to use in cooking the chives plant will appreciate some slow release fertilizer once a month.

The root system of chives forms small bulbs just like other members of the onion family.  You can divide a clump of chives in the spring leaving 2-3 bulbs per new plant.  Even if you don’t want more plants your clump of chives should be divided every 3 years to keep it vigorous.  If you don’t use the flowers in cooking clip them off as they start to fade so they don’t put energy into producing seeds- unless you want seeds.

If you are growing chives on the windowsill inside pick the sunniest window you have, preferably a south or west window.   Chives will also do well under a grow light.  Make sure the pot the chives are in drains well and let the pot dry out slightly between watering.  Chives grown inside rarely flower but will provide you with tasty greens.  If you clip them frequently they will need fertilization about once a month.

Both inside and outside chives rarely suffer from insects or disease problems. 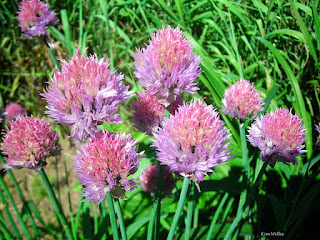 Chives have been used in cooking for thousands of years.  You simply cut off a few leaves ands mince them into tiny pieces.  I like chives in scrambled eggs, in cheese dishes, in salads, and even in breads and biscuits.  Chives blended with cream cheese is a favorite dip of many people.  They are also used to flavor meats.

Chive flowers make a pretty, edible garnish for salads and other foods.  Both the leaves and flowers can be dried and stored or frozen and stored.  Dried chives have less flavor than fresh but are still good.  Frozen chives seem to lose little flavor and are my favorite way to preserve them.

Chives are rich in calcium, iron, vitamin A and C.  Medicinally they are used as a mild diuretic and have antiseptic properties.  Chives help stimulate the appetite and some studies have shown that all members of the onion family may have a beneficial connection to preventing gastric and intestinal cancers.

Chives were used in earlier times to treat depression and at least one study found that chives improved dopamine functioning in animals.  Dopamine is a brain chemical linked to mood.  If you are feeling sad munch on some chives.

Gardeners often claim a border of chive plants helps repel Japanese beetles although no studies have been done to test this idea.

If you can have only one herb type plant, chives should probably be your choice.  They are easy to grow and have a pleasant mild flavor most people like.  Chives also have pretty flowers and attract pollinators.  What’s not to like?