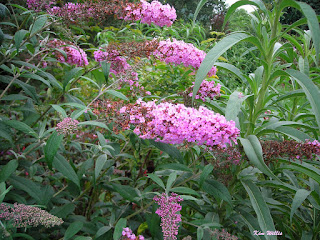 For late summer color and fragrance, and a beautiful feeding station for butterflies, nothing beats the Butterfly Bush.   Even smaller gardens can now enjoy this easy to care for plant, as dwarf varieties have been developed.   Hummingbirds and bees also appreciate the buddleias and they add color and structure to the garden as well.


Buddleia is also known by the common name of Summer Lilac.  Butterfly Bush is a much better name because it truly draws a circus of colorful butterfly species.  Some books may spell the Latin name of Butterfly Bush as Buddleja.


Most buddleias are native to China and Japan, although there are a few from other semi-tropical areas of the world, including the southern United States.  Most Butterfly Bushes on the market are selections of Buddleia davidii, but there are a few other species on the market. The plants form woody stems in warm climates but die to the ground in most of Michigan.   Butterfly bush is classified as a semi-shrub, or semi- woody, and most varieties get quite large and tall, 3 foot wide by 6 foot or higher, in one growing season.


The leaves of buddleia are long and narrow and range from deep green to silvery green.  There are some varieties with variegated leaves.  Smaller varieties have been developed that suit small spaces better.


Buddleia has numerous plumes of tiny colorful flowers, which begin opening at the bottom and continue to open for several days to the tip. The flowers are tube shaped with 4 or 5 petals.  Colors ranges from white to nearly black, many flowers have orange or yellow throats. Many varieties of buddleia are fragrant, but it is not an over-powering scent.


There are varieties of butterfly bush that are hardy in zone 5, but before purchasing check the zone hardiness, as some varieties may not be hardy in Michigan. Those in the far southern Michigan counties may be able to grow varieties rated to zone 6, particularly in protected areas.  Although some of what was formerly Zone 5 has been re-classified as zone 6, be careful as our last few winters have killed a lot of buddleias.  Buddleia is usually purchased as a plant and starts blooming at a very young age.  It can be started easily from seed however, and will bloom the first year if started early in the year.


Buddleia is slow to get growing in the spring so mark the plant location and give it time.  Once it starts growing it grows very quickly and makes a large shrub in one season.  Make sure you allow plenty of room for the plant when it is at its largest in late summer.


In zones 5 and 6, Butterfly Bush usually dies to the ground each year.    Since buddleia forms its blooms on this year’s wood, cutting the plants back to a foot above the ground each fall is a good idea.  This encourages the plant to put out more stems, and that means more blooms. The stubs will mark the spot so you won’t damage the roots before the plant begins growing in early summer.    Buddleia alternifolia, or Fountain Butterfly Bush, is an exception to this.  It blooms on old wood and only winterkilled wood should be removed in late spring.  If Fountain Butterfly Bush needs pruning to shape or control growth, it should be done immediately after flowering.


When buddleia begins to grow in the spring, fertilize with a slow release fertilizer for flowers.   The Butterfly Bush needs full sun and well-drained soil.  It is somewhat drought tolerant, but appreciates some watering during lengthy dry spells.   Buddleia blooms over a long period from late summer to late fall or the first hard frost.  Be careful working around buddleia as it is often full of bees.


When each truss of flowers has finished blooming cut it off.  This conserves the plants energy, keeps them blooming longer, and keeps the plants from spreading vigorously from seed.  In areas where it is happy, Buddleia can become invasive, with seedlings popping up everywhere.  Politically correct gardeners will take care that Butterfly bush doesn’t spread into natural areas, although the butterflies and bees might argue for its proliferation.


Some varieties of buddleia


Selections of the common Butterfly Bush, Buddleia davidii include ‘Black Knight’, a deep purple, ‘Santana’, which has variegated foliage and red-purple flowers, ‘Silver Anniversary’ which has silver foliage and white flowers, ‘Ellen’s Blue’, which is true blue, ‘Attraction’, which is magenta red, and “Adonis Blue’ which is only around 3-4 foot tall.   There are dozens of other varieties.  Butterfly bushes with yellow colors such as ‘Honeycomb’ and ‘Sungold’, [ball-shaped flower clusters], are selections of Buddleia weyeriana.   ‘Nanho Blue’ about 4 foot tall and ‘Petite Purple’ only 2 foot tall, are selections of B. nanhoensis.  Many new, compact buddleias are on the market, many of these are hybrids of several species.


Buddleia alternifolia, Fountain Butterfly Bush, is a shrub with weeping branches covered with tiny lavender flowers in late spring.   It blooms on old wood, and should not be pruned to the ground each fall.


No garden is complete without a butterfly way station like buddleia.  Even those who garden in containers can now enjoy this plant in its compact versions.  Do the bees and butterflies a favor and plant lots of Butterfly bushes. 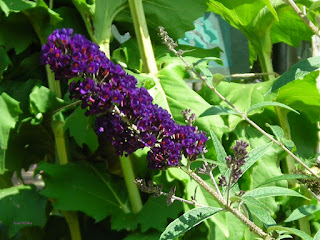