Tall and stately, hollyhocks have graced gardens for hundreds of years. Although not as popular now as they used to be, hollyhocks are a country charmer for gardeners who admire the cottage garden look or who are nostalgic for the old fashioned flowers that Grandma grew. Hollyhocks are so easy to grow to grow even a child can grow them and children love to play with hollyhock flowers. No country garden should be without a few hollyhocks in the back of the border, or against the barn wall. 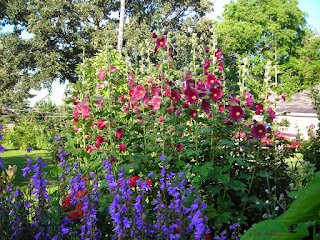 Hollyhocks are often used as a screen to hide undesirable views. Indeed, hollyhocks are sometimes called outhouse flowers because they were often planted to hide outhouses. A polite lady didn’t need to ask where the outhouse was- she looked for hollyhocks.

Hollyhocks could be planted around children’s playhouses to make them a little more secluded.
If you don’t spray your hollyhocks with fungicides the flowers make edible decorations for salads and baked goods.

Hollyhocks are bi-annuals, which means that they make a rosette of foliage the first year and then send up a long flower spike to bloom in the second year. There are some varieties of hollyhocks that will bloom the first year, especially if started early indoors. Some gardeners believe that if you deadhead the flowers, the plants will come back to bloom in the third year. Hollyhocks re-seed quite freely, and once established in the garden you should have some in bloom every year. Hollyhocks will grow in zones 3-9.

Hollyhocks have large, rounded, rough looking and feeling leaves that may have 3-5 lobes. The first year the leaves form a large clump up to 2 foot across and 2 foot high. In the second year hollyhocks send up one or more flower stalks, these have smaller leaves on them and may shoot up to 9 foot high. Along the flower stalk, buds develop which open starting from the bottom. As the season goes on the hollyhock bloom stalk gets longer, producing more flowers near the top. Hollyhock flowers open up like colorful saucers, up to 5 inches across. There are also some double flowered varieties that look like large pom-poms. Colors range from nearly black to white. Although there is no scent to hollyhock flowers, bees and hummingbirds like to visit them. Hollyhock seedpods look like a fat button, with a neat circle of flat seeds inside.

How to grow hollyhocks

Hollyhock seed can be sown where it is to grow up to 2 months before your first frost in the fall. Or you can start the seed indoors about six weeks before your last frost in the spring for flowers the second summer. Some varieties will flower the first year if started inside about 10 weeks before your last frost. Plants are often available in garden stores. If you are going to transplant seedlings from a friend’s garden, choose smaller, first year plants. These seem to establish easier. Pot grown plants can be transplanted even in bloom, although they may need a little extra attention. 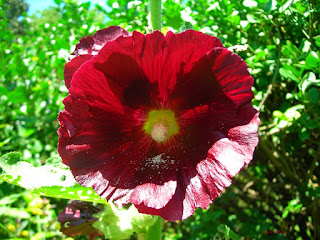 Hollyhocks like full sun and deep rich soil, but they will grow in less accommodating environments. In windy areas the tall flower stalks may need to be staked or the plants can be grown against a wall or fence that supports them. In the second year, to promote good flowering, fertilize hollyhocks with a slow release flower fertilizer in early spring.

If rainfall is less than 1 inch a week, hollyhocks should be watered. Try to water at the base of the plant and avoid wetting the leaves since hollyhocks are prone to fungal disease.

The major disease problem that hollyhocks face is rust, a fungal disease. It starts as orange, powdery looking spots on the bottom leaves. These spots turn into holes on the leaves. The plants continue blooming but begin to look very ugly. To control rust you can use a floral fungicide beginning as soon as the weather gets warm in your area. Some newer varieties of hollyhocks are being bred to be rust resistant. Keep hollyhocks thinned out so that there is good airflow around them and water at the base of the plant if possible.

Single flowered hollyhocks are often sold as Old Fashioned mix or Barnyard mix. Sometimes single colors are offered but after a few years you will find your re-seeded plants will be a variety of colors.
‘Indian Spring’ is a single variety that will bloom the first year if started indoors. ‘Happy Lights’ is a hybrid variety with single flowers about 3 inches across, that is rust resistant and will bloom the first year if started inside. ‘Creme de Cassis’ has single and semi-double flowers of rich plum red in the center that shade to pink on the edges. ‘Summer Carnival ‘ has semi-double to double blooms in a variety of colors and it will bloom the first year if started indoors. ‘Peaches and Dreams’ has lovely, huge double flowers in a blend of yellow, peach and pink. ‘Queeny Purple’ is a dwarf hollyhock with huge flowers of rich purple.

Older  gardens often have lots of hollyhocks; the stately plants are excellent at reseeding themselves around the garden.  Even newer gardens may have an abundance of hollyhocks if they were ever planted on the site.  Hollyhocks are hardy to  zone 4 gardens and they are easy to grow.

If you are an adult of a certain age, one who was sent outside to play as a child, you may remember making dolls out of hollyhock flowers. If hollyhocks are abundant in your garden why not introduce a child to the joys of gardening and playing outdoors by teaching them how to make hollyhock dolls, or as the young boys say hollyhock “people”.  And if you never made hollyhock dolls here are the simple directions.

First choose some hollyhock flowers of various colors in various stages of opening.  You’ll need some buds for heads, some half opened flowers for torso’s and fully opened flowers for skirts.  The flowers don’t wilt too quickly but don’t pick them too far in advance of assembly.

You can have the children find straight thin sticks for connecting the flowers or you can furnish them with some toothpicks. Start by choosing heads for the dolls.  Round hollyhock buds, with just a bit of color showing work well.  If the child has a marker or pen they can draw a face on the head. 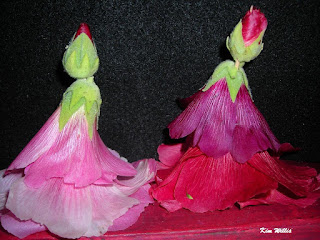 Next find the half opened buds that will form the middle of the doll and one or more pretty fully opened flowers for the skirt.  Make sure to leave the green sepal leaves on the back of each flower.  They keep the flower together and are tough enough to hold the fasteners securely.  Single flowered, not double flowered hollyhocks, make the best doll parts.

Stick a head on a toothpick or stick and then through a torso flower.  If the toothpick or stick is long enough you can stick it through the skirt flowers next, or you can use another toothpick to connect head and torso to skirts.  One or more layers of open flowers for the skirts in layers of different colors makes a pretty effect.

The open skirt flowers will generally hold the dolls upright, especially if a few layers of flowers are used.  After children get the hang of it, they can let their imaginations roam, combining colors, layering flowers, making arms and legs out of sticks and hats for the heads from single petals or other flowers.  Next they can imagine scenarios like weddings and fancy parties to enjoy playing with the dolls.

Unfortunately there’s no good way to preserve the dolls.  But hollyhocks flower abundantly and all through the summer so more makings are always there.  You may want to supervise children as they collect flowers, so that plants aren’t completely denuded of their glory.  But if you allow a group of hollyhocks to grow in a special place, just for doll making, children will always have a source of flowers. They’ll learn to ration the picking if you explain how plants form flowers and how long it takes.

In the age of TV’s in cars, the internet and oodles of cheap plastic toys an activity that gets children outside and into a garden and using their imagination is priceless.