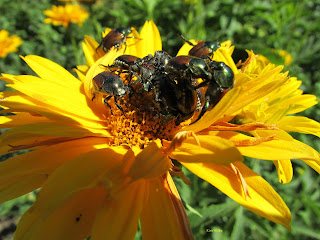 One of the most serious garden pests, Japanese beetles, hits gardens in zone 5-6 in July and early August. Gardeners in warmer zones may deal with them earlier.  Most gardeners have had to deal with this serious pest at one time or another.   The first Japanese beetles were found in New Jersey in 1916 and since then have spread west and south.  They are as the name suggests, native to Japan.

The Japanese beetle is a fat, oval, metallic bronze and green beetle, with a row of white spots along the sides of the body. The spots are clumps of white hairs.  The immature stage is a tan-white grub that is found in the soil of grassy areas where it feeds on plant roots.   It has a distinctive v shaped row of bristles on its rear end.  Japanese beetles can fly fairly well.

In Michigan, late June to early July is the time when Japanese beetle damage on plant parts above ground first becomes apparent and feeding continues for about a month.  However beetles emerging from the soil can continue into August and some beetles may persist all summer. Feeding on the roots of turf grasses is heaviest in the later part of summer and again in early spring.

When Japanese beetles emerge from the soil they eat for a few days and then begin mating and the females begin laying eggs back in the soil.    In the afternoon she leaves the plants she has been eating, goes to the ground and burrows up to 4 inches down and lays a few eggs.  This continues for days until she has laid roughly 60 eggs.

In warm moist soil the eggs will hatch in about 10 days and the new grubs begin feeding on grass roots.   Eggs and small grubs are very susceptible to drying out and not irrigating the lawn in summer may help control a grub population.

Adult Japanese beetles will feed on over 300 species of plants, including most of our ornamentals, trees, and fruits.  They eat the tissue from between leaf veins, turning them into ragged skeletons which brown and fall off.   They may also eat soft fruit.  The damage the grubs do in lawns and on golf courses appears as yellow spots, where the turf can be rolled back in patches like a rug.

As they feed and mate Japanese beetles release a scent that attracts other Japanese beetles and populations in an area may soon contain thousands of beetles.  They can do serious defoliation damage to plants, although the plants will generally recover in late summer when feeding damage is less.  It is estimated that damage and cost of controlling Japanese beetles to Americans is over 450 million dollars each year.

In July homeowners can apply grub control products containing imidacloprid (Merit) and halofenozide.  In spring if damage is apparent use grub products containing trichlorfon (Dylox) and carbaryl (Sevin).  Remember that these pesticides will harm many kinds of animals in the soil and may have toxic effects on pets and children too.

For ornamental plants a general insecticide for ornamental plants can be used but once again these will kill many types of insects, good and bad. Systemic products may do some good - but the beetle has to eat part of the plant to be killed.  They are best used early, before beetle populations get high.

For fruit trees, including ornamental types of fruit trees, a multipurpose orchard spray should be used as directed on the label.  For vegetables use an insecticide approved for edible plants.  Vegetables that don’t require pollination can be covered with lightweight row cover material to exclude beetles.

Hand picking and using a hand vacuum to remove beetles as soon as they are seen is helpful.  Once beetles get established they attract more beetles.  Japanese beetle traps are on the market but for them to work you must locate them far away from the plants you want to protect.

Research published in the Journal of Economic Entomology, 04/08/2009, found that a mixture of two essential oils, wintergreen and ginger oil, was quite effective at repelling Japanese beetles.   Peppermint oil was also a strong repellant. (Coffee and citronella oils actually seemed to attract Japanese beetles).  More research is being conducted to find the best way to use these oils as beetle repellants on crops.  These oils could be applied to food crops safely and would be relatively benign to the environment.

Other research conducted at the USDA Application Technology Research Unit in Wooster, Ohio found that geraniums could be part of the war against Japanese beetles.  Entomologist Chris Ranger found that Japanese beetles that ate geranium leaves were paralyzed within 30 minutes and stayed immobile for up to 24 hours.  While immobilized they are easy prey for birds and other predators or could be swept or vacuumed up.

Interestingly enough the paralytic effect of geranium leaves on Japanese beetles has been known since the 1920’s, about the time the pest arrived in the United States.  Ranger and a colleague have just begun to develop a natural pesticide using geraniums and have applied for a patent.

Japanese beetle traps that attract the beetles and then drown them have been around for years, but in small yards the placement of traps can be a problem.  The traps attract more beetles than might normally be in the area and need to be placed a good ways away from plants you want to protect.

A new protozoan disease that also kills Japanese beetle is being released throughout Michigan.  These natural controls are safe for the environment and kill only Japanese beetles. Both the milky spore disease and protozoan controls take many years to begin to be effective in an area.  But combining those controls with faster acting repellents made from essential oils or a geranium knock out spray could be the environmentally friendly solution homeowners have been waiting for. 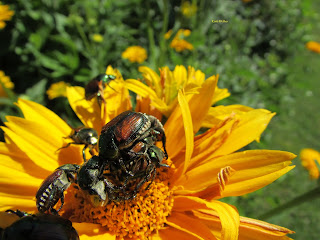